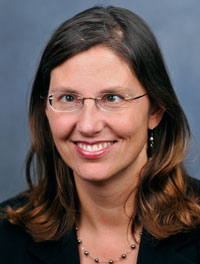 Gina Spade spent 13 years at the Federal Communications Commission and more than a decade working on universal service programs, including E-rate and the Rural Health Care programs.For more than six years, she managed the policy side of the E-rate team in the Wireline Competition Bureau (WCB), as an assistant and then deputy division chief in the Telecommunications Access Policy Division.  Her major accomplishments during that time include the 2010 Sixth Report and Order, the Learning on the Go pilot project, and was an advisor on the National Broadband Plan. She also oversaw the release of more than a thousand appeals, including major orders such as Bishop Perry.

Most recently, Gina was the deputy chief financial officer for USF program oversight in the Office of the Managing Director (OMD) at the FCC. In that role, she oversaw the Universal Service audit program and the Payment Quality Assurance program for all universal service programs, including E-rate and Rural Health Care. She was the FCC’s project manager for the risk assessment of the E-rate program performed following a recommendation of the Government Accountability Office. Gina worked on numerous cases alleging fraud and developed plans to detect and combat fraud and other program integrity issues. She also was responsible for the agency’s compliance with the Improper Payments Elimination and Recovery Improvement Act.

She also managed the Lifeline program in WCB.  In OMD, she helped draft the provisions of the agreed-upon procedures audit for carriers receiving significant Lifeline payments.

Also at the Commission, she led teams investigating whether to grant section 271 authority to incumbent local exchange carriers in WCB’s Competition Policy Division and played a significant role in other competition policy rulemakings.

Prior to joining the Commission, Gina worked on telecommunications issues, including interconnection, section 271 proceedings and numbering issues for competitive and incumbent telecommunications companies, at Hogan and Hartson (now Hogan Lovells) and Mintz Levin. She worked as a newspaper reporter before attending law school.